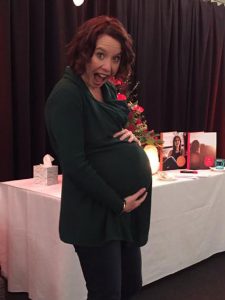 Last week saw us hosting our inaugural One of many™ Women’s Coach Training. It was truly a phenomenal week of transformation.

I have to say I am both thrilled and relieved to have accomplished this training at 37 weeks pregnant! And it struck me as a time of giving birth to two babies at the moment. Our own little Pumpkin, who has been upgraded from Peanut in the last month (can you see why from the picture?) and our One of many baby is also ready to be taken out further into the world.

This first coaching cohort are really fired up to share what they’ve been learning about Soft Power with other women and the world. But what is this thing called Soft Power? Where does it come from? Why do we use the term and what does it mean?

The state of women: bad news

According to UK statistics:

Indeed, since 1972 more than 6 different studies of millions of people around the world have shown that women’s overall level of happiness has dropped both relative to where they were 40 years ago, and relative to men. Now, this is regardless of whether they have kids, how many kids they have, how much money they make, how healthy they are, what job they hold, whether they’re married, single, divorced, how old they are or what race they are. With the slight exception of African-American women who are slightly happier than they were 40 years ago, but still less happy than their men.

So, we’re getting less happy, even though we find ourselves at a time when we have more access to opportunity and more access to power than we’ve ever had.

So, how does a woman who wants to step up and make her highest contribution in the world and step up to leadership do that in a way which still allows her to be happy and healthy?

The state of women: good news

The good news for we women is that we’ve got amazing opportunities right now.

So, on one hand there’s a calling for us to step up and lead.  Many of us feel in our hearts that that’s the path and our contribution that we need to make. But on the other hand, we’re burning out, we’re sick, we’re infertile and we’re unhappy. What’s the problem here?

The One of many™ hypothesis

We propose that the power that it took to get us where we are, to create amazing opportunities, to compete and be taken seriously as a force in the world; is not the kind of power that is going to be able to sustain us here.

We need a new kind of power to be the woman that the world needs us to be.

Stereotypically, there’s two kind of types of power that we’re most aware of right now.

One is, the bossy woman; she wears the trousers, the dominating, effectively very masculine Superwoman. But, she gets some stuff done.

The other powerful kind of woman that we recognise with is the woman who use sex as power. Think of our pop stars and our movie stars using that kind of sexy power.

They’re the two types of power that we tend to see most commonly in women trying to be “powerful”. And that’s because of the cultural paradigm that we live in. They’re the only two types of power that we’ve really given any credit to and, unfortunately, we’re playing with two keys on the piano, neither of which are particularly useful. But we’re in a masculine paradigm.

There is enlightening research by Hofstede’s into the relative masculinity of different cultures.  Highly masculine cultures display a preference in society for achievement, heroism, assertiveness and material rewards for success. Society at large is more competitive. Its opposite, femininity, stands for a preference for cooperation, modesty, caring for the weak and quality of life. Society at large is more consensus-oriented. In the business context Masculinity versus Femininity is sometimes also related to as “tough versus tender” cultures.10 This can lead to women acting like Superwomen to juggle all they have to do. Sound familiar?

Note also that the workplace itself though, is also another masculine paradigm. The domain of commerce and economics, since its inception many thousands of years ago, has been predominately dominated by men. It’s only really been very recently that we’ve seen anywhere near equality in representation inside of commerce. And there are some industries where it is still nowhere near equal. Especially in upper level management and board level, where we’re seeing still nowhere near equality of representation.

So, many of us live in countries that are embedded in a masculine paradigm. Then, we’re operating, as professional women in workplaces with unconscious bias towards the masculine. And then, many of us have individual experiences growing up that program us even further, to take on the masculine Superwoman archetype.

Our suggestion here at One of many™ is that instead of operating, always, in this masculine way we need to step into a different kind of power.

And we call that Soft Power. It’s no less powerful than masculine power. It’s just different.

Now watch your response to this.  Note that any master of martial arts, will know that the greatest way to get power from your opponent is to absorb the impact of their attack and turn that energy back against them. So, being yielding is sometimes a really powerful thing to do; not always fight, fight, fight.

Power: etymology: the middle English, which is “to be able.”

It’s not about dominion over, it’s just about an ability to do anything.

How do we, as women, start to be more able using a different kind of power?

We find central to it is the collaboration of many and not just the pursuit of one.

Let’s look at another example so that you understand this.  If you were to buy a hairdryer in the USA, it is designed to use the voltage 110 volts. Your US hairdryer works perfectly efficiently on 110V.

If you were to take that hair dryer to the UK where the voltage coming out of the wall is 230 volts and plug it in you would short it out. However, if you were to plug in a British hair dryer into the sockets in the UK, it works with perfect efficiency.

I don’t know and frankly it doesn’t really matter.

In just the same way, masculine energy isn’t better than feminine energy, what we would call Soft Power. And feminine is not better than masculine. It’s simply a question of what’s the right energy, the right voltage for your machinery.

Our bodies are designed to utilise more feminine energy than the average Western woman runs through her. We have breasts, a uterus, a different hormonal make up.  Our biology is different to men. Men look different to women, they have a different biological make up.

Does biology impact psychology?  Probably, but that’s not the point. What is relevant is that there are very many women burning out because we’re plugged into the wrong voltage.

So, what we invite you to explore- and that’s all we ask- is the possibility that there is a power that is more suited for you.

And it’s not about one or the other. Masculine or feminine all the time.

Most of us ignore the feminine though because we think it is weak.

What are your thoughts when I use the word “feminine”? Let me know in the comments below.

At One of many™ we work with 5 Women’s PowerTypes™, all feminine, all strong:

Sometimes you need nothing but a good bit of masculine energy to push through and churn out that project that needs completing by Friday afternoon. But, then you want to be able to go into your Soft Power when you get home to be with your family and your spouse because they’re not going to want to hang out with somebody who’s still pushing through and in overdrive.

So, for many of us, we need to swing the pendulum back the other way. We need to learn to trust what we call our Soft Power. We need to re-discover the power in our softness and that is the journey that we’re all on here together.

If this blog resonates with you and you’d like to discover how you can use cutting edge, proven tools and techniques designed for the unique personal and professional growth of women then click here to find out more about our Coaching Certification.